Empty Lots, Green Spaces, and a Parking Lot – What Happened to the Demolished Uyghur Cemeteries?

In partnership with RAND and written by Katherine Pfrommer

Analysis of 48 Uyghur cemeteries in Xinjiang indicates that while many were repurposed for the reasons cited by the Chinese government, fully a third were demolished with no further development on the site.

This methodology seeks to build upon previous research efforts and help other researchers understand the outcomes of Chinese policies related to Uyghur communities. Readers can view this analysis using 3rd-party tools such as Google Earth or ESRI systems. Structured data (Excel) is also available for download for 3rd-part enhancements or study.

As reported in numerous media outlets, the Chinese government has demolished at least 48 and possibly over 100 Uyghur grave sites in the Xinjiang Uyghur Autonomous Region. Official spokespersons for the Chinese Ministry of Foreign Affairs say the destruction of grave sites were required to meet the demand of city planning including infrastructure development such as roads, ecological parks, and high-rise buildings. This is not unique to Xinjiang: as metropolitan areas all over the world grow over time, interest in re-developing cemeteries areas for commercial or public use is not uncommon and is often met with resistance by affected communities. However, when placed within the context of the Chinese government constructing large-scale detention facilities, forcing millions of Uyghurs into re-education camps, and destroying thousands of mosques and cultural sites in Xinjiang, the targeted demolition of local cemeteries may be part of the Chinese government's efforts to eradicate Uyghur cultural traditions and their broader group identity.

Although Uyghur cemeteries have been removed or replaced for other land uses in previous years, a flurry of cemetery demolition took place in late 2018 to early 2019, with some being replaced with smaller "ecological" cemeteries. A 2016 article from Aksu Prefecture indicates this started after an initiative to standardize public cemeteries to improve social stability, rural revitalization, and ecological protection.1 The concept is to create non-profit ecological cemeteries to "cherish [every] square inch and turn graveyards into green mountains and green hills, and let the green, ecological, land-saving and safe funeral concepts become the conscious behavior of the people of all ethnic groups to integrate into the modern lifestyle [to] handle the relationship between cemetery construction and maintenance of stability." Each county appears to have their own plans for incorporating the new cemeteries. For example, the Civil Affairs Bureau of Aksu Region stated that as part of their 2016 - 2019 plan they would "break down" or divide the task of building 235 new cemeteries across all the townships in the region.

The objective of this research is to revisit demolished cemeteries to determine how these areas have been changed and modified to align with stated government goals. We started our research with data from the East Turkistan National Awakening Movement (ETNAM), a US-based organization that strives for the restoration of East Turkistan's independence as an open, pluralistic Republic guaranteeing Human Rights and Freedoms for all. ETNAM, in conjunction with Earthrise Alliance, produced a geospatial dataset documenting 48 razed cemetery plots in November 20, 2019, which we use as a basis for our assessment. Using GoogleEarth and Maxar imagery, we documented the boundaries of the original cemetery plots prior to demolition and the boundaries of the present-day cemetery area associated with each point in the dataset. We collected information on the status of the demolished plot area, whether the area has expanded, and the presence of new ecological cemeteries. We also noted their relative distance to detention facilities identified by Australian Strategic Policy Institute from the perspective that the construction and development policies that supported creating these detention facilities reflects Chinese government land use choices and priorities. This dataset is available to researchers as an excel table and the points and boundaries of cemetery locations are available as a KML file.

Our findings, shown in Table 1, indicate within this dataset of demolished sites most are located in Hotan and Shayar counties. Shayar county is the site of almost all new cemetery plots built over previous cemetery areas. Almost 50 percent of all demolished cemetery areas were eventually expanded beyond the original plot and usually redeveloped to some degree. Land was partially developed 43 percent of the time or fully developed with new residential buildings, green spaces, industrial buildings and parking lots, or farmland 25 percent of the time. However, 32 percent of the demolished cemeteries areas remain entirely devoid of any type of development or land usage. This is a higher percentage of redeveloped sites and lower percentage of undeveloped sites found when compared to a larger study by the Australian Strategic Policy Institute which examined land use at sites of other demolished mosques. Their study of the 187 destroyed mosque sites found only 22 percent had been redeveloped for other purposes; 65 percent of remained bare ground, and 12 percent had been converted to agriculture areas, roads, or parking lots.

Included in this dataset are three cemetery sites that were demolished prior to 2017. Located in Korla, Shihezi, and Urumqi, we found two of the sites were partially developed and one site remained empty. However, around all three sites were larger patterns of construction and urban development. The oldest renovated site, Urumqi in 2006, was redeveloped at the same time as other demolished sites in the area by 2009 and the town now appears to be completely urban. The site in Korla and surrounding areas that were demolished in 2010 remain empty but are now adjacent to a roadway built by July 28, 2011.

Figure 1 shows the Yengichimen cemetery area, which has since been demolished and replaced with new ecological cemetery structures, shown in Figure 2.2 The blue border shows the original cemetery area and the red border shows the present-day land area border. In areas where new cemeteries are built, they often take up only a fraction of the original land with the remaining area left undeveloped. Part of the motivation behind creating ecological grave sites achieved through cremation - is driven by a reduction in available space for new burial plots. This burial policy is being encouraged across all regions in China. However, it is not evident that this problem was considered a major issue in rural areas like Xinjiang, even in the more populated towns. Given that Chinese authorities were able to find land to build at least 182 suspected camps and 209 suspected prisons as of 2019 in Xinjiang, including in cities and towns, it is reasonable to suggest there may have been alternative spaces for new cemeteries in less populated areas, in lieu of destroying local cemeteries.

Figure 3 shows a small cluster of three small cemeteries in Hotan which have each had their demolished land redeveloped differently. The Hotan 8 cemetery area appears to have been replaced with crops and vegetation, Hotan 9 appears to be empty land, and Hotan 10 appears to have buildings and construction on the southern part of the original area. Within this same cluster, of which, again, cemeteries are being destroyed partly because of a lack of space, a suspected camp (shown at the red marker) appears in the area by October 2, 2017. It replaces a previously unoccupied lot. There also appears to be a large building built across the street. Within 50 kilometers of this area, 31 new suspected detention facilities have been constructed, as estimated by ASPI.

1) Aksu News Network, "At the end of 2019, the Aksu area has basically achieved full coverage of the construction of public welfare ecological cemeteries," 20 May 2016. As of December 7, 2020: https://archive.is/BZzbY. Quoted statements were translated into English. See also, Civil Affairs Bureau, "The region continues to promote the construction of non-profit ecological cemeteries," Aksu Prefecture, 13 August 2018. As of December 7, 2020: http://archive.vn/iMqCV. Quoted statements were translated into English.

Table 1. Status of Demolished Cemeteries in Xinjiang Uyghur Autonomous Region as of 2020 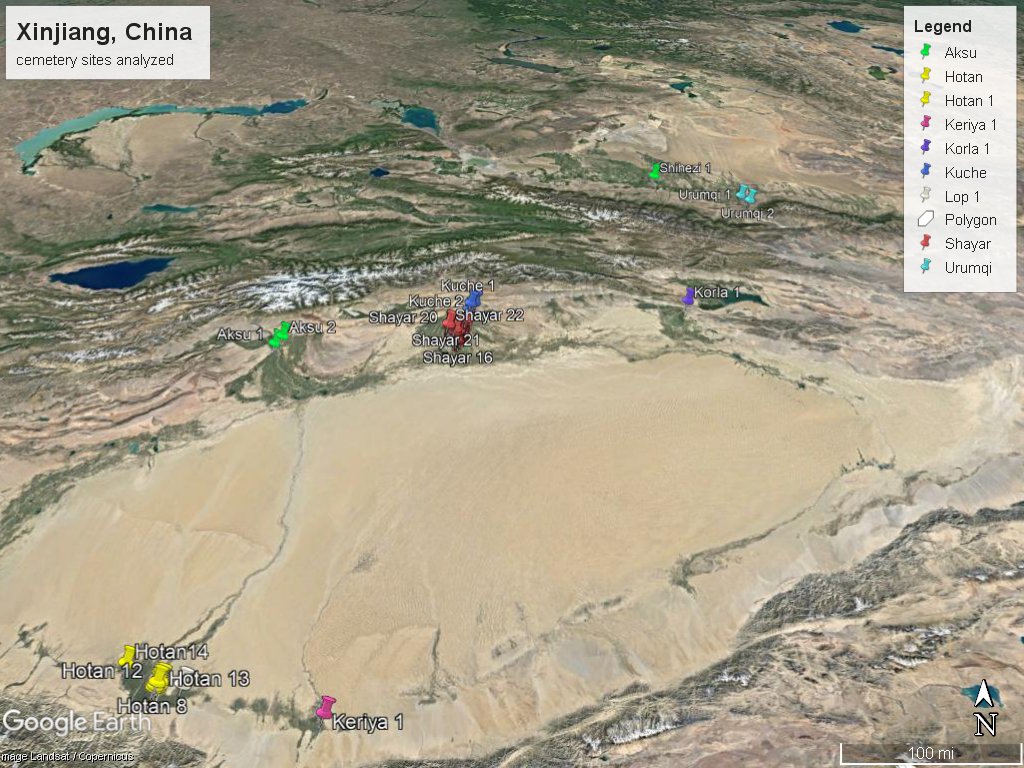 Looking Ahead
Based on statements made from officials and <a href="https://cnn.com/2020/01/02/asia/xinjiang-uyghur-graveyards-china-intl-hnk/index.html">other reporting</a>, the dataset analyzed in this study represents only a fraction of the cemetery plots believed to be demolished in Xinjiang. As we gather more geospatial information on the locations of destroyed cemeteries, we will expand our research and dataset. Please see "Data Sources" section for other download formats to help with methodology familiarization.
Things To Watch
Data Sources