In partnership with RAND and written by Ed Burke

In this third Tearline report, RAND identified 21 facilities that could be where western researchers, press accounts and professional journals indicate preschool-aged Uyghur children are schooled and often housed in Qira (Chira) County, Hotan prefecture. Some of the newly identified facilities are on the grounds of primary schools, while others were not imaged frequently enough in the last four years to determine firm construction timelines.

This third methodology report can help other researchers identify facilities that could be used to house children of detained Muslim minority groups, through the analysis of satellite imagery correlated with other sources. Other researchers can view this analysis in 3rd-party tools such as Google Earth or ESRI systems. (See "Data Sources" section for downloads).

While some of the new suspect facilities have the same postage-stamp appearance that distinguished those in prior reports, many Qira County facilities differ in at least two ways: Some have been added to existing facilities and some lack the more apparent signatures such as controlled gate access that can be distinguished on imagery. This complicates their identification by satellite imagery alone.

The methodology for this report is inductive and qualitative. It relies on the collection, synthesis and analysis of professional journals, visual media, western research reports and Chinese government documents, all as reported in western media. This body of information led to the thesis that preschool age children in Xinjiang, left without parental supervision in their birth homes, were being both housed and schooled in what we have termed preschools. The contextual information was then compared to a body of satellite imagery of Hotan Prefecture in order to geolocate suspected preschool facilities that were in accord with the contextual information. We also performed a comparative analysis of preschools with a limited sampling of primary schools we identified using Chinese language, internet-based maps of Qira County. We cannot confirm with satellite imagery alone that these facilities house preschool aged children.

RAND used NGA-funded commercial imagery and public Google Earth layers to identify 21 suspect facilities in Qira County, one of seven county-level administrative entities in Hotan Prefecture. As determined in two previous reports on this subject (here and here), the facilities are similar in construction style and uniformly include a playset typical of facilities designed to accommodate small children. Determining specific construction timelines is problematic, as there are large gaps in imagery collection between 2016 and 2019 in parts of Qira County.

While some of the new suspect facilities have the same postage-stamp appearance that distinguished those in prior reports (Figure 1), many Qira County facilities differ in at least two ways: Some have been added to existing facilities and some lack the more apparent signatures such as controlled gate access that can be distinguished on imagery. This complicates their identification by satellite imagery alone.

Qira County #9 is a representative example of a building added to an existing compound. Imagery coverage is sporadic; the structure was not present in June 2015 (Figure 2) but was completed by November 2017 (Figure 3.) A Chinese online map suggests this compound might be the Ukhadi Village Primary School, but the scale and detail of the map are insufficient to make this assessment. The compound does include an exercise field, but it lacks the artificial surface or field lining for a soccer field found at other primary schools in Qira County.

We did confirm a facility (Figure 4) that was not present in 2015 (Figure 5) but added to a school by late 2017 (Figure 6.) Qira County #10 was added to an existing compound housing what a Chinese language map identifies as Qira County #1 Secondary School (Figure 7). The school was refurbished sometime in 2017, to include adding a soccer field, on the same timeline as the preschool and of nearby Qira County #1 Primary School (Figure 8.) Consolidating preschools that house children on other school grounds is consistent with another western researcher's reporting and analysis of Chinese government documents that Xinjiang authorities are doing so as a means of control of children whose parents have been sent to re-education centers, detention centers, or prisons.

One of the facilities we identified, Qira County #11, highlights the rapid and dramatic redevelopment Xinjiang authorities have undertaken in many of these towns. In this case, the structure was present by November 2017, at which time some of the homes appeared to have been abandoned as they lacked roofs (Figure 9). There were no imagery signatures that would suggest it served as a preschool at that time. Then, a large apartment complex was under construction nearby by August 2018 (Figure 10) and another in 2019. The facility itself was renovated in mid 2019, with the playset typical of preschools visible by November 2019 (Figure 11).

In the southern portions of the county, imagery is insufficient to determine construction timelines for structures that could meet our criteria; in addition, no playsets are distinguishable on the limited imagery available. One facility in this area that did include a playset is Qira County #16 (Figure 12). There are also several possible facilities in these areas that will require additional imagery over time to confirm or refute. 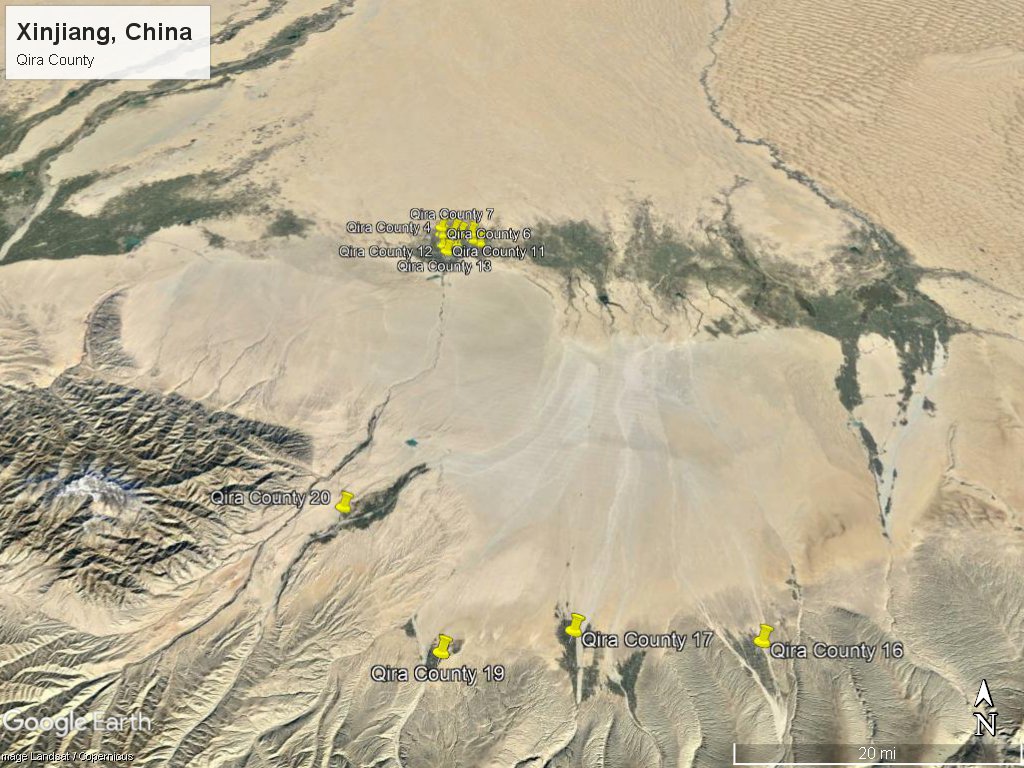 Looking Ahead
Is there any correlation between Xinjiang authorities consolidating children into compounds in communities where people are forced to <a href="https://cgpolicy.org/wp-content/uploads/2020/12/20201214-PB-China-Zenz-1-3.pdf"> pick cotton manually</a>?
Things To Watch
Data Sources