Impacts to Cultural Heritage in Ukraine

This report summarizes confirmed impacts to cultural heritage sites due to the armed conflict in Ukraine between February and June 2022. All impact confirmations were made by the Cultural Heritage Monitoring Lab (CHML). CHML's methodology for the confirmation process relies on analysis of high-resolution commercial satellite imagery (access supplied by NGA). In total, CHML analysts confirmed conflict-related impacts to 108 cultural sites throughout Ukraine between 24 February and 30 June 2022.

The Cultural Heritage Monitoring Lab (CHML), a partnership between the Virginia Museum of Natural History (VMNH) and the Smithsonian Cultural Rescue Initiative (SCRI), has monitored and recorded impacts to cultural heritage sites across Ukraine throughout the ongoing conflict. CHML has utilized the best available technology, practices, and expertise to create a comprehensive database of sites in Ukraine, including structures, monuments, landscapes, and places of cultural importance.

When Russia launched a full-scale invasion of Ukraine on 24 February 2022, CHML was poised to begin real-time or near real-time monitoring. CHML uses two data sources to geolocate potential impacts to cultural heritage sites: 1) open source data, and 2) remote sensing data. Because these data sources are publicly accessible, CHML can quickly disseminate reports on potential impacts to stakeholders and the wider public. Using high-resolution commercial satellite imagery, potential impacts are then reviewed to determine if they can be confirmed. There is a time lag inherent in the confirmation process due to satellite periodicity, but this lag is a matter of hours or a few days, meaning CHML can typically report confirmed impacts within 72 hours of a kinetic event. By June 30, CHML identified over 450 potential impacts, and this report is the first thorough analysis of confirmed impacts, with the first tranche at 108 confirmed impacts.

Lead: A lead designates an unconfirmed, open source report that a heritage site has been damaged, and is therefore utilized as a starting place rather than as a confirmation. Common leads include social media posts, single-source interviews, and unconfirmed news reports.

Potential Impact: A potential impact is a classification used to designate cultural heritage with possible damage. Sites are classified as “potential impacts” when they are determined to have a moderate-to-high probability of having sustained damage due to direct overlap with, or proximity to, remotely-sensed kinetic activity. Both leads and potential impacts are used as tips for queuing further investigation via satellite imagery (i.e., “tip and queue”).

Confirmed Impact: Leads and potential impacts are re-classified as confirmed impacts when additional, independent lines of intelligence confirm that a site has indeed been impacted. Most impacts are confirmed through the identification of damage in satellite imagery. Other confirmations come from multi-sourced or Russian news reports, such as reporting on Russia's seizure of artifacts in the Melitopol Museum. This CHML Tearline report helps to define the confirmed impact category. CHML's previously published work focused on the potential impact category.

The basis of this research is a 28,000-site GIS database maintained by CHML. Housed at the Virginia Museum of Natural History (VMNH), CHML monitors threats to cultural heritage sites around the world in partnership with the Smithsonian Cultural Rescue Initiative (SCRI). The development of the Ukrainian dataset was initiated in April 2021 in order to identify cultural heritage destruction in eastern Ukraine and Crimea after the Russian annexation of the peninsula in 2014. Initially, the inventory consisted of 26,000 sites, but additional data scrapes have contributed to a current inventory of over 28,000 sites. CHML's geographical dataset recognizes Ukraine's pre-2014 borders, and thus includes heritage sites in eastern Ukraine and Crimea. The research methodology did not include an analysis of damage attribution, and thus the results may include damage caused by either Russian or Ukrainian Armed Forces. This data does not include monuments that were removed by the Ukrainian government—for example, portions of the People's Friendship Arch, which were dismantled on 26 April 2022.

CHML's cultural heritage inventory was developed in collaboration with the Smithsonian Cultural Rescue Initiative. The categories of historical and cultural spaces that qualify as cultural heritage sites were taken from the Cultural Heritage Site List (CHSL) data standards, developed by the Penn Cultural Heritage Center (PennCHC) at the University of Pennsylvania Museum (National Science Foundation Grant #1439549). The geographic dataset was derived from open sources, academic publications, gray literature, and the contributions of professional colleagues. New sites are regularly added to the dataset. Nevertheless, there are some notable omissions. CHML's inventory of 28,000 sites does not fully account for all of the cultural heritage sites in Ukraine—in particular, the great number of governmental and educational buildings that are also historic structures. There are also hundreds (if not thousands) of new burial and mass burial sites (from 24 February 2022 onwards) in Ukraine and these have not been added to the inventory.

From February to June 2022, CHML analysts monitored over 28,000 cultural heritage sites in Ukraine using open source research, remote sensing, and high-resolution commercial satellite imagery. The inventory is maintained and visualized in a GIS, with monitoring activities providing inputs to a “site status” field. Monitoring occurs every 48 hours, with the status for each cultural site remaining or shifting between “no impact detected,” “potential impact,” or “confirmed impact.”

Every 48 hours, remotely sensed fire data released by NASA FIRMS is pulled and overlaid on the cultural inventory GIS. Sites in the geographic areas overlapping FIRMS locations are marked as potential impacts. From there, CHML analysts review each potential impact with commercial satellite imagery to identify whether there is any visible damage to the site. Simultaneous open source research, such as social media and news media, provides additional reporting of potential impacts. These leads are geolocated so that they can also be queued for confirmation via commercial satellite imagery. Open source leads in particular may document damage to a site that is not visible in commercial satellite imagery, so many of these impacts remain unconfirmed. The conservative nature of CHML's approach means that confirmations should be taken as a minimum number of actual impacts.

Highly detailed and precisely geolocated heritage site data is not included in this study for operational security purposes. However, abstracted and aggregated analyses have value to show broad trends and categories.

Compared to CHML's prior reporting on potential impacts, the confirmed impacts (Table 1) appear to overrepresent larger sites and structures (e.g. museums and churches) and underrepresent smaller sites (e.g. memorials and monuments). This can be attributed to limitations in the resolution of the satellite imagery used in the confirmation process, where damage to smaller sites is not always visible.

Churches and other places of worship number in the thousands across Ukraine. While religious sites make up a substantial portion of the sites in CHML's inventory that can be analyzed through remote sensing, the context of the conflict has also led to a large amount of reporting on impacts to religious sites in particular.

Arts Centers in this analysis typically refer to Houses and Palaces of Culture, which were constructed as part of Soviet programs but still act as focal points of cultural activity for many Ukrainians in both rural and urban settings. As mentioned previously, a lack of historic structures in CHML's inventory means that the impacts to these objects are likely undercounted in potential and confirmed impact reporting.

The majority of these impacts are in urban settlements, where cultural sites are more densely located and where much of the conflict has been focused. As the conflict progresses in Eastern Ukraine, and as CHML continues to make impact confirmations, this pattern of urban impacts may change. 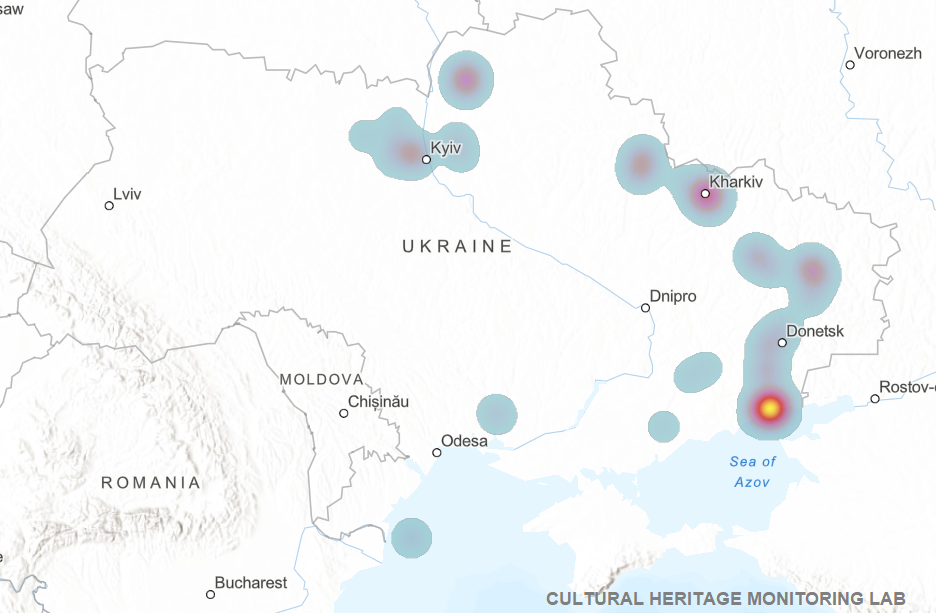 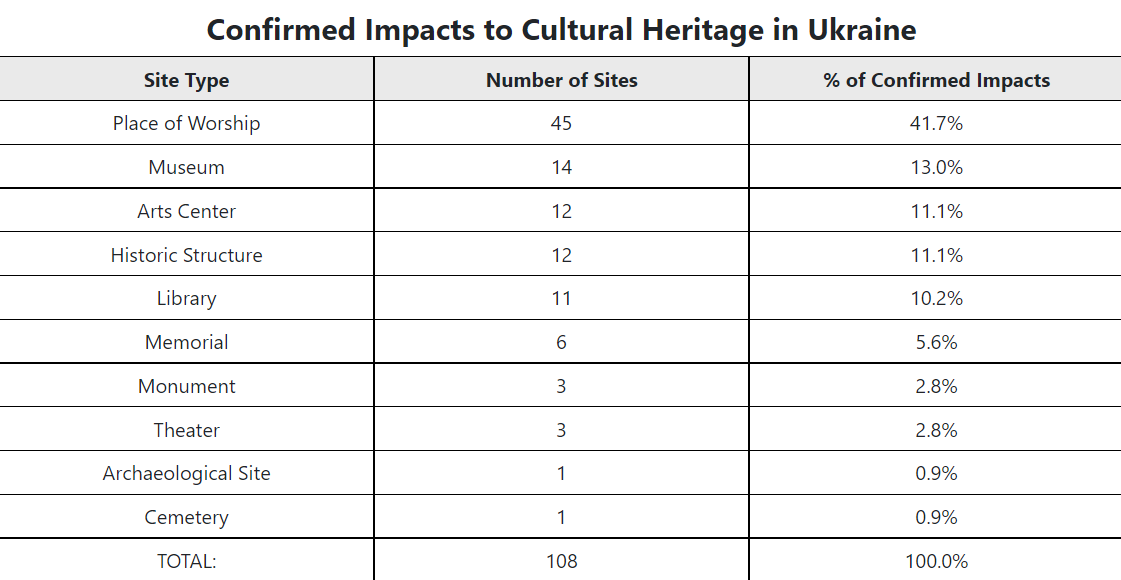 Looking Ahead
This report is the first of a series of confirmed impact analyses, detailing confirmed impacts from February 24 through June 30. CHML will continue to monitor cultural heritage impacts throughout the country from direct, indirect, and post-conflict response activities. The next report will expand upon this report, with confirmed impacts occurring and/or observed in the weeks to follow.
Things To Watch
Data Sources

In partnership with The Global Disinformation Lab at The University of Texas at Austin
Published: November 23, 2022

Impacts to Cultural Heritage in Ukraine, 1 July through 31 August 2022

In partnership with The Global (Dis)Information Lab at The University of Texas at Austin
Published: May 24, 2022