RAND has identified 55 facilities suspected of housing young children the construction of which coincided with a publicly stated policy to build “boarding schools” in Xinjiang. Western researchers and press allege that Xinjiang authorities are using repurposed and newly built schools to board Uyghur youth as part of a policy of intergenerational separation.

This second methodology report can help other researchers identify facilities that could be used to house children of detained Muslim minority groups, through the analysis of satellite imagery correlated with other sources. Other researchers can view this analysis in 3rd-party tools such as Google Earth or ESRI systems. (See "Data Sources" section for downloads).

GEOINT analysis shows steady construction progress in both 2017 and 2019 of suspect facilities in southern Xinjiang.

See first Tearline report for background on China's "re-education" policies and detention activity in Western China and our methodology.

The suspect facilities identified in Yutian County meet our imagery-based identification criteria, which is informed by other research and reporting. Like in our previous report, the 55 facilities have similar construction timelines, locations, and physical features.

Local governments have constructed schools under the auspices of poverty alleviation efforts; however, in rebutting the first Tearline report on Hotan area facilities, Chinese state media appears to have confirmed in early June 2020 (also seen in a China Daily article from January 2020) that these are not merely schools, where children attend during the day, but that they also house children. The increased construction of facilities that serve the dual purpose of housing and educating suggests that a large number of parents may be unable to care for their children. In any case, children remain in these facilities rather than returning to their homes, no matter how near or far those may be. Furthermore, researchers say that the movement of childcare from the home and family to the state isolates children from their culture and language and may be part of a larger series of policies aimed at weakening the identity of Muslim minorities. The Chinese state media report also erroneously claimed that the first report alleged that the schools were engaged in re-education like at the adult detention facilities across Xinjiang; it did not.

Yutian County is both very rural and sparsely populated: At over 15,000 square miles it is nearly twice the size of the state of Massachusetts and would rank as the fifth largest county in the United States. Its population in 2010 was about 250,000, some 95% of whom are Uyghur.1 Figures 1-4 below and imagery in the timeline section represent examples of the distinctive features present in these facilities against a contrasting image showing a larger primary school that has a more spacious appearance and lacks playsets because the school is for older children.

Figure 1: Example of facility without colorful circles/play mats, protruding edges on the building, and "postage stamp" appearance. See KMZ file or Shapefile for more examples of this type of facility.

Figure 4: Comparison of primary school, Yutian County Central Primary School. Note the larger size, more spacious appearance, more buildings, and athletic track below compared with the smaller and more compact appearance of the facilities with playsets above and in the KMZ file and Shapefile. 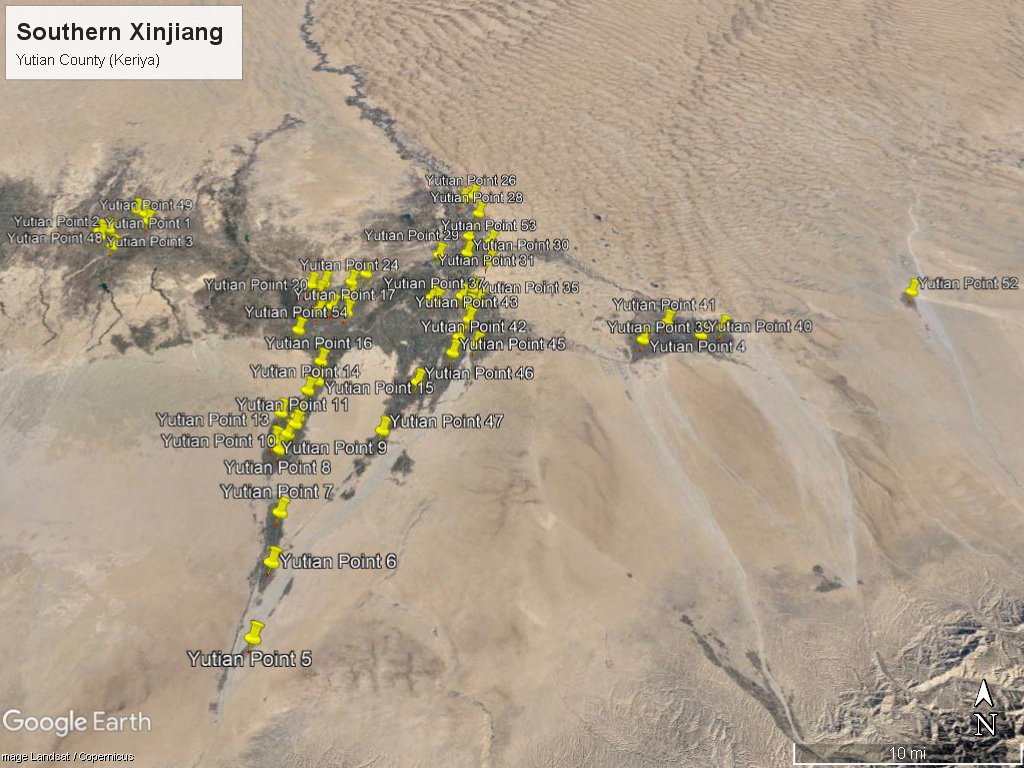 Looking Ahead
Subsequent reports on the other six counties of Hotan Prefecture, and of Hotan city itself, will be forthcoming.
Things To Watch
Data Sources