This methodology report can help other researchers identify these child detention facilities (mostly from satellite imagery). Other researchers can view this analysis in 3rd-party tools such as Google Earth or ESRI systems. Structured data (Excel and CSV) is also available for download for 3rd-party enhancements or study.

China's detention since 2017 of more than one million ethnic Turkic Muslim adults in its northwestern province of Xinjiang has been widely reported and accepted at face value as a matter of US policy, but the fate of the children separated from their parents as a result of these policies has received less coverage. Chinese official press has said the transformation through education facilities for adults teach Chinese language and values, while Western researchers and nongovernmental organizations liken the facilities to internment camps, where the detained adults are subjected to forced indoctrination. The mass removal of parents and other adult extended family members from their homes has resulted in a need to house children. Satellite imagery-based research confirms that construction of new, suspected preschool facilities, which appear to serve the dual purpose of housing and educating children, coincided with the adult detention program, probably to meet the increased childcare needs necessitated by the governments wide-ranging crackdown and core policy of ethnic unity. For its part, China characterizes the construction of both preschools and boarding schools in Xinjiang as part of its poverty alleviation efforts.

Against this backdrop, RAND researchers, using NGA-funded commercial imagery and methodology reviews, sought to add to the body of research available by performing a satellite imagery search to find examples of suspected preschool facilities. The imagery search was restricted to rural areas the Uyghur-majority city of Hotan because new construction would stand out more there than in urban environments.1 As of July and August 2018, Chinese procurement officials sought to build at least nine structures with enough beds to house about 5,000 children in and around Hotan. Most facilities reportedly include a minimum of 100 beds, with some accommodating much larger capacities. The goal was to identify some of these facilities, characterize them in a narrative and then provide geolocated and structured data of the suspect facilities as foundational data for subsequent research. This work is exploratory, and therefore qualitative; it is intended to be iterative.

To date, RAND, using NGA-funded commercial imagery, has identified 20 suspect facilities that meet our imagery-based identification criteria, which is informed by other research and reporting. Broadly, the 20 facilities have similar construction timelines, locations, and physical features.

This research does not represent a comprehensive imagery search of all of Xinjiang, which at 660,000 square miles in area is about four times the size of the state of California. Xinjiang authorities in early 2017 reportedly had begun the construction of 4,387 preschools to accommodate 562,900 new students, so this research has identified just a very small percentage of the potential total, and just in rural areas near Hotan. Figures 1-4 below and imagery in the timeline section represent examples of the distinctive features present in newly constructed preschool buildings.

Figure 1: Example of paired preschool buildings completed near Hotan since 2017

Figure 2: Example of preschool with colorful mat/circle characteristic completed near Hotan since 2017 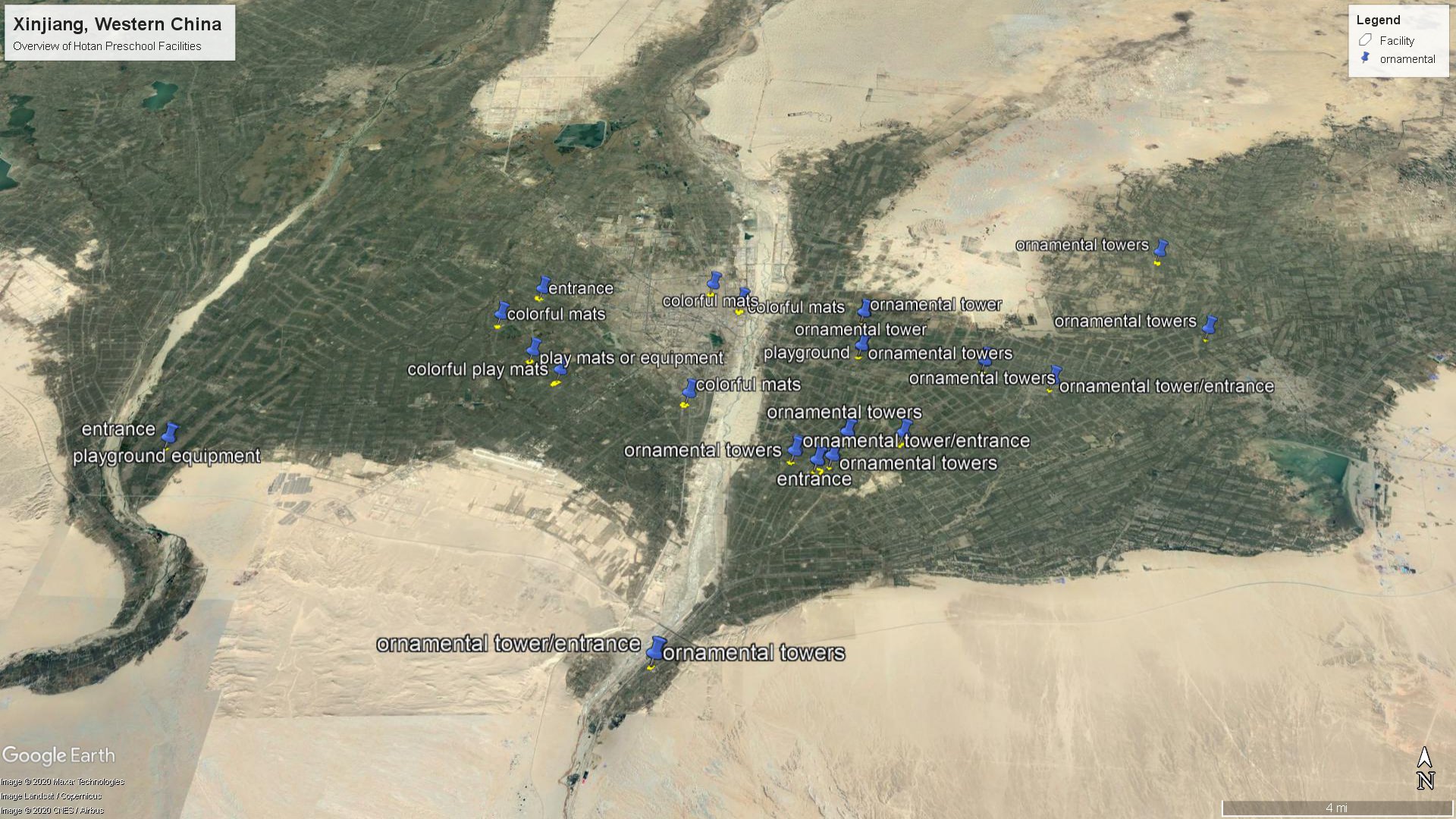 Looking Ahead
This is the first report in a series of geolocation studies to document comprehensively China's detention infrastructure targeting Uyghurs and other Muslim minority groups. Please see "Data Sources" section for other download formats to help with methodology familiarization.
Things To Watch
Data Sources