Across the Tracks: North Korean Railcar Manufacturing and the 2018 Inter-Korean Agreement

Connection and modernization of railways in the Korean peninsula's eastern transportation corridor is a declared step within the historic April 27, 2018 joint declaration for peace, prosperity, and unification.

Chongjin Railway Factory is one of two major railway manufacturing facilities in North Korea's eastern corridor. Analysis of this facility can be a brick-and-mortar sign-post of foundational infrastructure progress if the trust-building project of reconnecting the Koreas' railways is carried out.

Railway manufacturing facilities have served as a necessary link in North Korea’s underdeveloped economy, presently offer new possibilities in inter-Korean relations, and will be foundational infrastructure for future unification. However, knowledge of North Korea’s infrastructure is lacking according to a pilot survey of regional experts conducted by CSIS Beyond Parallel. The following in-depth study of North Korea’s railcar manufacturing infrastructure seeks to begin to address that void. While the Chongjin Railway Factory is currently active, commercial satellite imagery shows this activity is at a lower-than-anticipated level for a facility of this size and layout, suggesting shortages of raw material, energy, financial resources, administrative malaise, economic limitations, or any combination of these.

North Korea's railroad system, with over 7,400 kilometers (km) of track, is critical both to the North Korean economy and national defense, serving as the primary means for long-haul cargo and passenger transportation.1 Chongjin city, the largest city by square kilometers outside North Korea's capital, is a key part of this system as the most significant hub on the North Korea section of the freight rail line connecting Beijing, China, and Khasan, Russia, and one of a handful larger hubs in the domestic railway network. Most significantly, Chongjin is also home to North Korea's second-most active trading port, accounting for 24.2 percent of the country's import/export activity in general cargo, agricultural goods, coal, and steel. The Chongjin port has a handling capacity of approximately 8 million tons, second only to that of Nampho in the southwest.2 It boasts the second-greatest length of dock space usable by commercial shipping in the country at approximately 2,888 meters.

The railway factory located in Chongjin, therefore, plays a relatively unassuming, yet vital connecting role in the regional and national economies. As efforts progress to modernize and reconnect the eastern transportation corridor between North and South Korea under the April 27 Panmunjeom Declaration, the railcars produced and serviced at the Chongjin Railway Factory could play an increasingly important role. The Chongjin Railway Factory is one of just five major industrial facilities that undertake railcar production and depot-level repairs for the nationwide network. It is primarily engaged in the manufacture, repair, and scrap of railcars. Some small parts are likely manufactured within the factory, while others are scavenged from scrapped railcars or procured from local light industries. While the factory is active, commercial satellite imagery shows this activity is at a lower-than-anticipated level for a facility of this size and layout, suggesting shortages of raw material, energy, financial resources, administrative malaise, economic limitations, or any combination of these.

The Chongjin Railway Factory (41.793718 129.796317) is located in the eastern section of Chongjin city and adjacent to the Chongjin Chongnyon Rail Station. As of February 2018, the Chongjin Railway Factory is an active repair and production facility and is being maintained at a reasonable level by North Korean standards. While there are approximately 140 railcars of various types present in the railyard, there are no visible indications of any significant new railcar production. This activity, however, could easily be missed if it is undertaken at a low level.

There are no readily available reports of Kim Jong-un visiting the factory since he came to power. However, attesting to the facility's historical importance to the economy, a number of reported high-level visits to the factory have been undertaken by Kim Il-sung, Kim Jong-il, and other senior officials over the years. Furthermore, railcar manufacture and repair, as well as the Chongjin Railway Factory itself, have been frequently mentioned in North Korean media.3

Despite the importance of railway system and by extension its associated manufacturing facilities, outside knowledge of North Korea's infrastructure is lacking, according to a pilot survey of regional experts conducted by CSIS Beyond Parallel. When experts from the United States, South Korea, Japan, and Russia were polled, approximately 50 percent said they believed there was insufficient or no empirical analysis available on infrastructure. For example, of the South Korean experts surveyed, 46 percent said this of China, 50 percent of Japan, and 71 percent of Russia.

With regards to the movement of railcars, those positioned on tracks leading to the main assembly/repair hall on the east side of the facility exhibit regular changes in numbers and types of railcars present. A number of tracks on the west side of the yard, apparently used to store railcars for scavenging spare parts and eventual scrapping, have railcars that have not moved in years.

The imagery also shows piles of rubbish throughout the facility. However, this is somewhat typical of railroad facilities such as this and should not necessarily be taken as an indicator of level of activity. Obvious in any summer or fall imagery of the factory is that almost all open space at the Chongjin Railway Factory is used for gardening. While such gardening is typical of large industrial facilities in North Korea, the level seen at the Chongjin Railway Factory appears somewhat high which is likely an indicator of a reduced level of railway-related activity.

Read More
Read Less
1 Aug 2000
Slow Recovery(?), 2000-2004
By 2000, however, the Chongjin Railway Factory appears to have begun slowly recovering and was reported to be repairing “trains using innovating technology.” It was apparently also diversifying as a report from August 2000 states that the factory was now also repairing tractors. While this may have been a reflection of the expanding practice for industrial facilities to undertake work outside their normal area of operations, it appears to be more an indication that the factory was still facing significant challenges in procuring raw materials (for railcar production). This assertion appears supported by a nationwide campaign that year to collect scrap iron for use in steel mills. The Ministry of Railways was responsible for transporting the collected scrap iron to the steel mills and claimed great success in doing so. In December 2000, the Korean Central Broadcasting System reported that the Chongjin Railway Factory had “achieved its annual plans.” These claims on the surface, however, appear difficult to accept.

While there was little North Korean reporting on the Chongjin Railway Factory or railcar production and repair during the Arduous March, it may be deduced that the period had resulted in the dramatic curtailment, if not suspension, of railcar manufacture at the factory. During a May 1999 conference on the need for increased iron, steel, and mine production in North Hamgyong Province, it was announced that “Comrade Kim Jong-il, the great leader of our party and our people, sent rolling stocks to the Chongjin Railway Bureau.” Had the Chongjin Railway Factory been operating effectively at this time there would have been no need to do so.
Source(s): Joseph S. Bermudez Jr., “Kim Chaek Iron and Steel Complex: Down but Not Out,” 38 North, June 20, 2016., “Kim Jong-il Sends Rolling Stock to Ch'ongjin Railway,” KCBS, May 3, 1999. 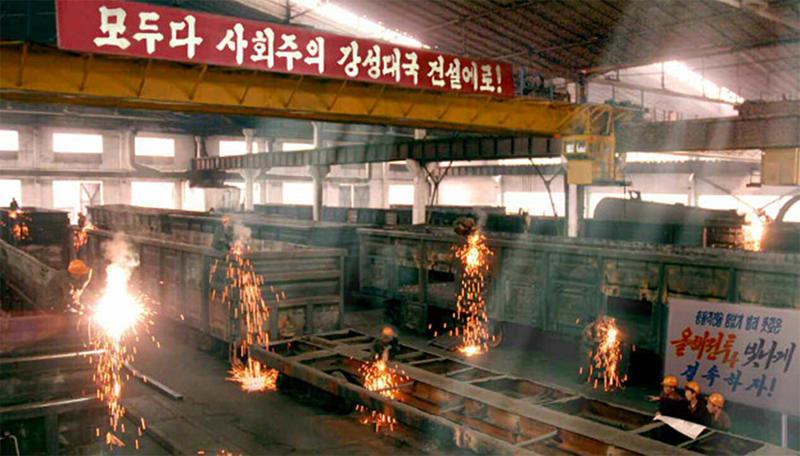 It is presently unclear both when the railroad shops at Chongjin were officially renamed the Chongjin Railway Factory and when the facility was expanded to allow for the serial production of railcars. Declassified satellite imagery from January 1976, however, shows a facility that differs little in size and composition from that seen on the U.S. Army’s 1946 city map. This suggests that the formal establishment of the factory may have occurred sometime after the Supreme People's Assembly held in December 1977 when Kim Il-sung established strategic direction and guidelines for railway development and railcar production.
Source(s): A declassified medium-resolution (6-9m) KH-9 image taken on January 27, 1976 of central Chongjin showing the area of the Chongjin Railroad Factory. Central Intelligence Agency., An Pyong-min, “The Significance and Implications of the North-South Railway Linkage Project,” 27–95.

Within Chongjin railroad, facilities were constructed to support this rail line and service the port facilities, nearby mines, and later the Seishin Iron and Steel Works, Mitsubishi Iron Works, and other industries. Significant among these facilities were the railroad workshops in the northern section of the city.

During the immediate post-World War II period the nascent North Korean government took control of the rail network, including the railroad workshops in Chongjin. The importance of the rail network to the nation at this time is indicated by the story that Kim Jong-suk, an anti-Japanese partisan and Kim Il-sung’s first wife, reportedly visited Chongjin in December 1945 to "encourage railway workers to take active part in the struggle for building a new country after the country's liberation from Japan's colonial rule.” Kim Il-sung is reported to have stated during this immediate postwar period:
“In order to build a new Korea, we must reconstruct the destroyed industry as soon as possible and create a prosperous economy. For that purpose, we must first normalize transportation by restoring railways as the country's artery. ...The running of railways is the equivalent to the circulation of blood in a human body."
Source(s): U.S. Army., “Mementos Associated with Immortal Feats of Kim Jong Suk,” KCNA, December 22, 2017., As reported in An Pyong-min, “The Significance and Implications of the North-South Railway Linkage Project,” in Win-Win Proposition for North-South Economic Cooperation (Seoul: Hyundai Research Institute, April 2000), 27–95.

North Koreas' railroad system, with over 7,400 kilometers (km) of track, is critical both to the North Korean economy and national defense, serving as the primary means for long-haul cargo and passenger transportation. The railway factory located in Chongjin, therefore, plays a relatively unassuming, yet vital connecting role in the regional and national economies. As efforts progress to modernize and reconnect the eastern transportation corridor between North and South Korea under the April 27 Panmunjeom Declaration, the railcars produced and serviced at the Chongjin Railway Factory could play an increasingly important role.

The Railcars of the Chongjin Railway Factory

Commercial satellite imagery indicates the primary type of railcars manufactured and serviced at the factory are 60-, 100-, and 125-ton gondolas, used primarily to haul mineral ore and coal from mines to heavy industries and powerplants in the province. Small numbers of tank cars, 2-bay hoppers, passenger cars, and other railcars are also frequently observed.

If, going forward, the April 27 inter-Korea agreement is substantially executed, Chongjin and its Railway Factory will be an area of focus given its role in the eastern transportation corridor. Furthermore, evidence of high-level visits to the site would be a significant sign of heightened priority being given by North Korean leadership to transportation infrastructure development and improvements.

Tearline is a transparency project of the National Geospatial-Intelligence Agency.

Certain features of this website may not print properly.

To access a printer-friendly version of this page, please click the Print icon located near the bottom of the page.